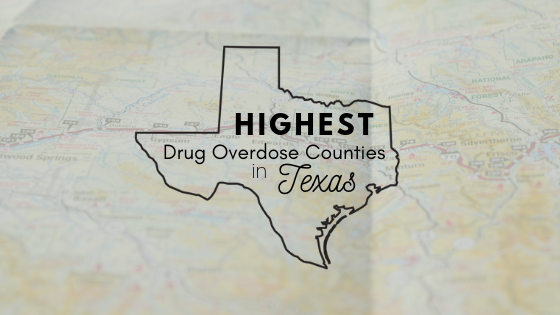 The opioid epidemic claimed 52,000 lives across the nation in 2015. We are holding the magnifying glass up to our backyard - Texas - and breaking it down by county, cities within that county, and number of drug overdose deaths per 100,000 people based on CDC data between 2014 and 2016. Even with these numbers listed, overdose cases are typically underreported. Some counties may seem obvious as they house one or two major cities, however other counties on this list may come as a surprise. Let's take a look.

What may seem to be the place where the retired go to reside, is also a hub for drug overdosage. Most are attributed to the elderly, who are more likely to lose track of whether they've taken their pills for the day and take another round down. However, high school aged children are experimenting with what's in mom's medicine cabinet, in addition to the current MDMA abuse in the area.

In January 2018, the Police Chief of Argyle announced Naloxone, a nasal spray that can reverse the effects of opioid overdose, will soon be carried by every police officer in the county, complementing the EMS team already equipped with the antidote. Denton County officials have also emphasized that drug addiction is not something only the homeless and downtrodden struggle with, but in what has seemed as a silent progression is impacting the early 20's, middle-class, Christian demographic - whether it's opioids or the street alternative heroin.

"We have more opioid addicted people in Nueces County than anywhere else. That's not something we're proud of," stated Mike Pusley, Nueces County Commissioner. The opioid epidemic has struck the area so hard, they're gathering resources to fight back in a potential lawsuit against drug manufacturers for their direct linkage to the problem. County Commissioner Pusley is also quoted saying, “There's enough clear evidence here the pharmaceutical companies misled the public on how big an impact these drugs would have on people.”

DEA special agent of El Paso, Will Glaspy, is on record saying the city is a hub for drug cartels and acts as a distribution center for the rest of the United States, particularly to Chicago, Boston, and New York City. It is not farfetched to think a sizable cut is going to locale in the area, as opioid and methamphetamine abuse in the area is on the rise.

Simply Googling "drug overdose Collin County" brings up many horrific stories of accidental poisonings, more so amongst teenagers. In October 2016, a federal investigation found Dr. Randall Wade of McKinney to have prescribed over 1.5 million pills of hydrocodone over a course of 28 months and was linked to 6 opioid overdose deaths in the area. He is currently serving 10 years in federal prison.

Fentanyl, a drug with which the smallest exposure could kill, has claimed an increasing number of lives in Travis County - mostly those of heroin users by accident. Granted, people shooting heroin are engaging in risky behavior anyway, many in central Texas have met their demise by ingesting fentanyl-laced heroin in their concoction.

Similarly to Travis County, the massive inflow of feaux-fentanyl being sold as heroin is claiming the lives of many addicts who assume they are getting exactly what they paid for when injecting their usual amount. Imagine this situation like a shot glass filled with a straight vodka to which of-age adults may be used to, and can handle. Now replace that liquor with rubbing alcohol. Both liquids have about the same in color, however that typical amount is now much more potent and would likely be lethal. This brief illustration is a fair comparison to what is happening with heroin users.

The opioid epidemic hit Bexar County so hard that in late 2017, the federal government stepped in and granted $3 million to train and equip medical staff and law enforcement with Naloxone. The grant will also be used to hire four substance abuse counselors to be placed in local hospitals and educate the general public on how to spot an overdose and administer the Naloxone antidote.

The problem is coming from many fronts in Dallas County - overprescribing doctors, illegal street drugs, black market painkillers, and even parents' pill cabinets. Even local police have noticed many DWIs are now coming as a result of opioid abuse rather than alcohol consumption. U.S. Attorney John Parker, representing the Northern District of Texas, is part of what is known as a "strike force" combatting the opioid epidemic by targeting pill mills, in addition to shutting down bank accounts and seizing assets related to drug trafficking in the region.

Containing the 4th largest city in the United States, Harris County tops the list of overdose deaths in the state of Texas. In a prominent case, Houston City Council Member Larry Green was found dead due to an accidental drug overdose after inhaling aerosol spray in combination with methamphetamine. The use of cocaine and methamphetamine in Harris County claimed 289 lives in 2016 alone - and that number continues to increase with time. Not to mention Houston is namesake to a deadly mix of prescription drugs; what's known as the "Houston Cocktail" includes Hydrocodone, Xanax, and Carisoprodol (muscle relaxant) and is said to give a heroin-like high.

The opioid crisis is at an all-time high and will take tremendous continued action to slow it down. The places you thought were bad are worse, and the small towns with clean reputations have deep-seated issues. In all these situations, there is one commonality: Opioid abuse. Though some counties' visible issue is with heroin, how does it start? Granted, heroin is a huge problem but the even greater root lies in opioid abuse as heroin is the cheaper alternative if the painkiller supply is cut off.

One thing is for certain: These deaths could be cut drastically if doctors tee-up drug testing with their patients. Sure, an impromptu drug test could raise flags with a patient, however, the sole reason for testing is not because of suspicion, but to ensure the patient is not taking any drug that could cross-react with the introduction of new medications. Starting at the source in a clinic setting would at the very least prevent patient overdosage and provider overprescription, which would stagnate the upward trend of addiction and overdose deaths in the United States.