EKRA and How It Effects Pain Management Physicians 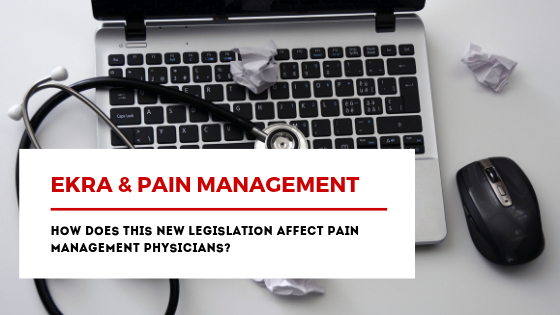 What's known as the Eliminating Kickbacks in Recovery Act of 2018 (or EKRA) has flipped the world of pain management and laboratory testing. Though the verbiage targets treatment centers, recovery centers, and clinical laboratories, the repercussions have shaken the health diagnostics industry. This is the reality of ghosts of healthcare's past and their crossover into the present.

The ways of old permitted loopholed kickbacks so long as Medicare, Medicaid, and Tricare never contributed to an invested physician's payout. Any government-subsidized healthcare plans would be referred to a lab in which the clinic was not invested, to maintain compliance with Safe Harbor law. Big 5 Payers and PPO plans with out-of-network benefits were sought after and played a major role in physicians being vetted to become part of an investment.

Where the Recovery in EKRA really takes precedence is the spotlight being shown on bills in the thousands for urine drug testing. What typically costs a clinical lab less than $50 to run, is billed out at several thousands of dollars. This is an attempt to capture the highest payment possible from insurance companies, which then goes into the investor pool. If insurance paid only $100 of a $7,000 bill, the remaining balance would be billed to the patient - thus the outrage of high bills coupled with using out-of-network laboratories. If an out-of-network lab is still billing high into the thousands with the EKRA legislation, it is fair to think they still offer an investment. If they haven't been audited yet, it is only a matter of time.

With the new EKRA legislation, it is illegal for payment to be influenced by volume or revenue received by a laboratory - $200,000 and up to 10 years in prison per occurrence. Sales representatives must be set at a fixed salary, which leads to the next question: What is the motivation to sell? Representatives will be tasked with finding new business, but once they've signed up a clinic, there is no incentive to come back and resolve issues. The number of times existing sales representatives and account managers come into a clinic will dwindle even further and the cycle of finding a new lab with better service propels forward.

Sales groups or MSOs (Managed Service Organizations) selling on behalf of labs are not exempt from this, however, it is legal if a fixed payment is arranged with said group. This still leaves the existing question on the table: What is the motivation to sell? If sales groups are paid the same amount every month, why should they continue going into a clinic account to upsell? The lab having to trust the distributor group, rather than paying a percentage on what's sent in, is similar to paying Loot Crate a flat subscription fee where some months they may send a package filled to the brim or nothing at all.

That's the bottom line of it. Why would a doctor opt to use an out-of-network lab, knowing patients would be frightened to receive balance bills in the thousands? The value proposition lies in payment. EKRA has leveled the playing field, as laboratories who once offered investments are no longer allowed to. Doctors still receiving checks should know that the well will soon run dry, as either that lab stops disbursing to stay in compliance with the law, or is shut down by audit or law enforcement. Laboratories must legitimately compete on quality service and not rely on disbursing revenue to referring physicians.

What Can Be Done?

Laying it all out like this has presented it to be a horrible situation, but it is also an opportunity. Doctors referring specimens to a lab with shoddy service for payment is now removed from the equation. Providers must evaluate labs based on low cost, turnaround time, range of services offered, or anything else that is pertinent to making their practice more efficient. This is a step forward in making healthcare better. In removing corruption and kickbacks, ensuring care for patients is now back at the forefront.